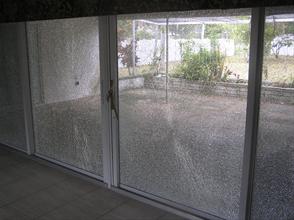 Security threats to your home and building come in all forms, ranging from natural disasters to emergency situations, theft, terror attacks and break ins. All of these situations can put you and your tenants in harm’s way. A comprehensive, tiered security plan offering multiple layers of protection is the best way to provide the highest level of protection possible, and security window film adds a lot of credibility to it.

Now, if we get a little technical, security window film is four times as thick as solar film, it’s an eight mil thick film, comes in clear to shades of neutral (gray), it comes with a very aggressive adhesive which grabs onto the window, which gives it the resistance to shattering, These films come with a life time warranty which covers bubbling, peeling, discoloring.

Donnie Greenberg, owner of Light and Bright Window Tinting, says “We have been serving the South Florida market for the past 35 years and we have seen, throughout the last 10 years, how much the security window film has helped families to keep their homes and windows safe. It is a great piece of mind and on the top of all can save you energy and money, and as a professional window tinting company we guarantee all our work/labor and film which carries a limited life time warranty”.